Day 5 - Fishing for the faint hearted

Its the morning after the night before .. and at 9 we take the 5 or so hour trip back to our hotel in Kuching. Nanga Sumpa Iban lodge was a fantastic experience, made more enjoyable with the antics and different personalities of the guides and people staying there on their various trips.

First I spot Ben, he has been up early, as he has a trek with his small group, and is showing signs of wear from last night. Nixon appears and is looking worse for wear, with anti-leach socks that look like Celtic football socks, you can see he is going to have a rough day of it in the heat. John, Teddy and Ali are all up and have all made some contribution to breakfast. In Nanga Sumpa, with a little help from some of the Iban, the cooking, treking, organising, and entertainment is all taken care of by the guides. One of the benefits of being semi-alcoholics is that we are fine ... well there has to be some advantage of living in the UK.. 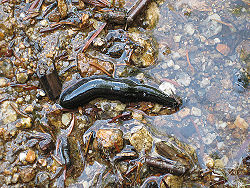 With all the hustle and bustle of yesterday, it was so busy I had forgotten to mention Larry !!! He didn't play a big role in the day yesterday, but he made a significant impact on me.. well my foot anyway. Larry, the leach, had at some point attached himself to my foot during one of the times I had been out pushing the boat. I didn't even notice that Larry had attached to my foot, and we only noticed him when he was spotted in the boat. No-one had any idea of where he had come from, but we put him out of the boat on a leaf to continue his life as a want-to-be vampire somewhere else. I did however notice blood on one of my sandals, but presumed I had caught it on a rock .. Nooooo.... somehow Larry had attached, and detached on the top of my foot, and with his anticoagulant properties, my foot had bled continuously until I noticed it back at the Long House.. I still have the mark on my foot, as a "fond" memory ??  Had I noticed he had been having a snack.. he would have got the cigarette burn treatment... 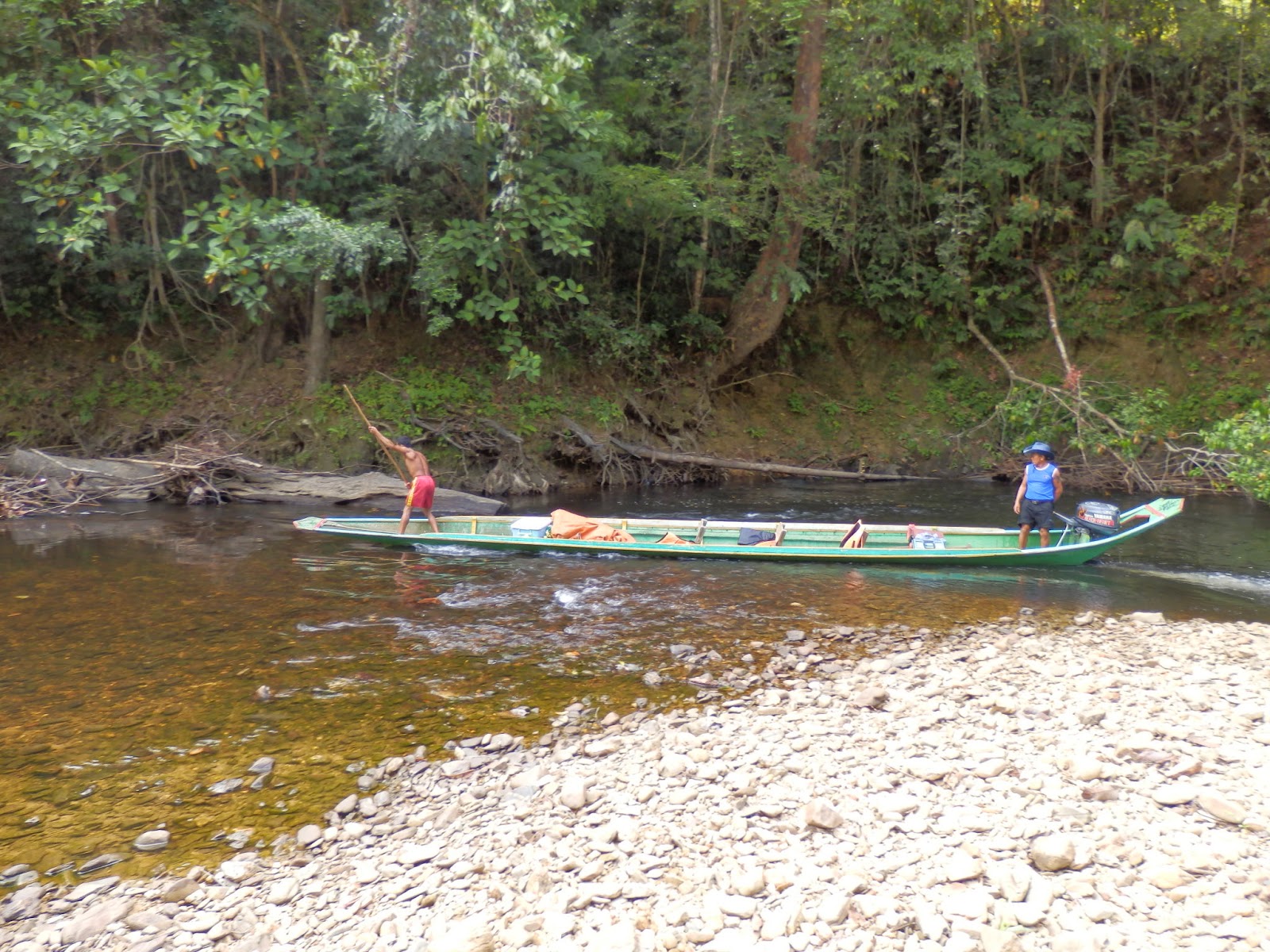 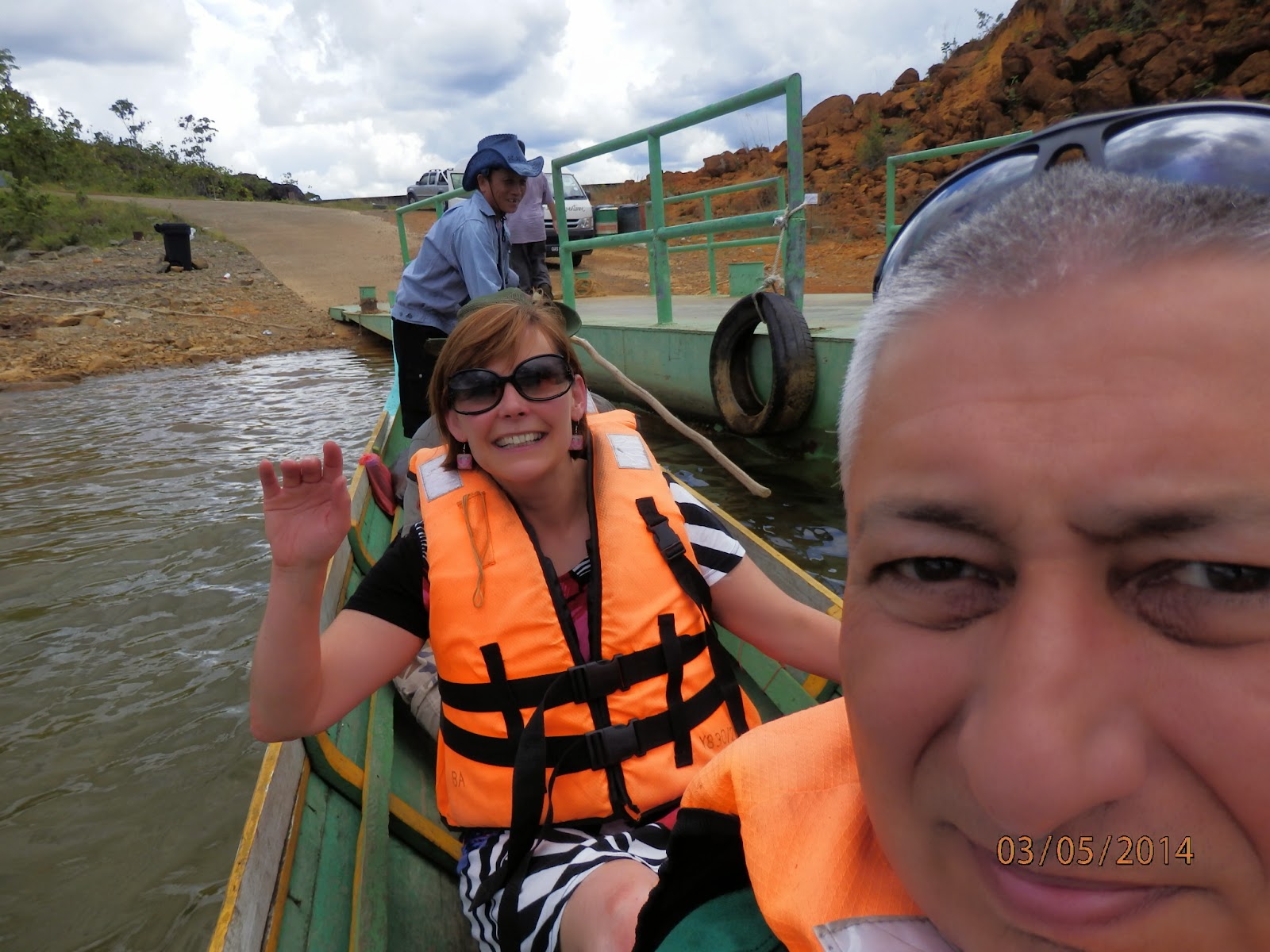 The guides set off on their trips, and we set off to return back to Kuchin and the various comforts of hotel life for a night - bed - hot water - toilet - bar - windows - roofs - you know - comforts !!

We weave our way down stream, which is significantly easier than upstream and the shallow rapids push us along and we manage not to get stuck. At least I stayed in the boat this time.

As on the way out we stop half way for a pit stop / toilet break / and a chance to see what a local market offers for snacks .. snacks like a Sago worm ... yes made famous by that Oz jungle programme, the Sago worm is eaten as a snack, live by the older generation (mostly) BBQ by the younger generation in Borneo. It apparently like chicken. Pretty surprising how many things are..


The next stop is the half way point for lunch - then its off again for a 2 hour + trip to the hotel.


Its time to say goodbye for now to our guide John, and time to have a quick dip in the pool, change into some clean clothes - burn the limited stuff we have been wearing for 3 days, and get ready to pop out for the evening.

After huge debate its agreed that its Top Spot for dinner.. Top spot is like a fish market where you pick from live and dead fish stalls the food you want to eat - they then go away, cook it (we hope as we can really tell what is served raw, cooked, or in fact live), but welcome, most welcome, is beer with your food.. Nanga Sumpa it was a choice of water, water, and for a change, water. Its not as harsh as fishing and killing your food by hitting it on a rock, but its not too far detached from this either.

A mixture of various sea life later, with soft shell crab, and Squid, and its back to the comforts of the hotel for a last beer and bed.